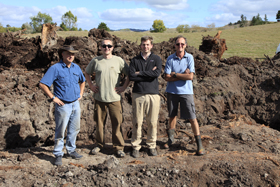 The Younger Dryas (YD) cold event, from ~12,900 to 11,700 yrs ago has been closely scrutinized by Quaternary geologists, palaeoclimatologists and archaeologists for more than two decades. Research focused upon the causes, timing, duration, geographic extent and impact on hunter-gatherer groups of this important cooling episode, has been hampered by inconsistencies in radiocarbon, ice core and varve time scales.

The Younger Dryas cold event, represents an abrupt Northern Hemisphere cooling episode, punctuating the general warming trend from the Last Glacial Maximum (LGM; 22,000 years ago) to the Holocene (11,500 years ago). The timing of cooling leading into the YD and its duration are still incompletely understood. There is now strong evidence implying time-scale differences between the international 14C calibration curve (IntCal09), and the tree-ring/ice core scales for this critical time period. These chronological discrepancies undermine the calibration of all Lateglacial 14C dates and are hindering determination of the synchronicity of climate change between regions and archives, which is urgently needed to help elucidate the mechanisms of abrupt global climate change.

The Northland sub-fossil kauri resource represents one of the world's foremost archives of atmospheric records during the last 60,000 yrs. Kauri logs are buried in bogs scattered over a 300-km stretch of northern New Zealand, with the acid conditions resulting in a remarkable state of preservation of the wood. Some of the buried trees are of enormous proportions, with diameters greater than 4 m and individual ages of more than 2,000 yr. This wood contains an immense, high-resolution store of information about past environmental conditions, including climate and landforms. The time span covered (>60,000 yr) and the potentially detailed climatic reconstructions possible from the long series of annual rings preserved in these trees means that this wood is a scientific resource of international significance.